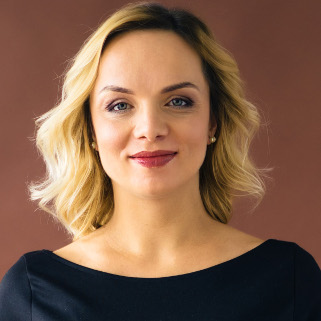 Oksana is a road safety specialist with 10 years’ experience of managing donor funded projects including initiatives funded by the EU, World Bank and EBRD.

Oksana is highly experienced in promoting road safety issues agenda with stakeholders, locally and nationwide. Oksana is effective in organising and coordinating volunteers and civil society groups to participate and bring best value to campaigns, including involvement of schools, NGOs, local engineering companies and others. Oksana is skilled in all aspects of events and public campaigns organisation, the creation of promotional materials, media coordination, social media, websites, stakeholder engagement, organisation of conferences and roundtables as well as communication strategies.

She is an experienced moderator and speaker and regularly participates in events and conferences on road safety.

Founding Board Member and Project Manager at the Road Safety Support Foundation (RSSF), 2012 -2017
RSSF designs and implements national and local campaigns to improve road safety. They specialise in partnership working bringing together a range of stakeholders including national government, local authorities, communities, the private and voluntary sector.

Project Expert/Communications Manager, “Safe Villages” Project aimed at reducing road casualties in the villages bordering the M06 Kyiv-Chop highway, 2013 – 2014
Project partners included the European Bank for Reconstruction and Development, Eastern Alliance for Safe and Sustainable Transport and the Road Safety Support Foundation.  Oksana worked closely with local municipalities of the participating cities and villages to deliver the communications component of this project and to co-ordinate activities for schoolchildren, teachers and parents as well as horse cart drivers. She designed and implemented a project communication and public awareness plan. A package of information materials was developed including bill boards and leaflets for different target audiences. High-visibility materials such as school bags, bracelets, pendants, stickers and caps were produced and distributed. Oksana organised and moderated three regional and one national round table at the end of the project, involving regional and local authorities,  universities, the general public and transport NGOs to improve dialogue and increase awareness about the road safety issues and proposed actions.

Campaign Manager for “Lviv Safe City” Road Safety Project, 2013
This project was launched in Lviv with the support of the local authority and the Mayor’s Office and in partnership with the local community and small businesses. The project reduced casualty rates in the city by increasing road safety awareness and education, improving the road infrastructure and ensuring better local police enforcement. Oksana devised the campaign plan and took responsibility for all planning and implementation. She engaged volunteers from NGOs and civil society and launched a campaign with low cost measures for road safety including promotion materials, websites, online games, TV and radio adverts. She also trained a group of young people who went on to conduct training in schools across Lviv.

Local Coordinator for the EuroRAP / World Bank funded project “Development of a Safer Road Corridors Investment Plan”, 2012 -2013
This project devised a road infrastructure safety improvement plan for 1519 km of roads managed by UKRAVTODOR. The project prioritised an investment plan for three road safety corridors to be implemented under the Second Roads and Safety Improvement Project. Oksana provided organisational and communication support as well as coordinating stakeholder engagement and public workshops.

Mission Coordinator for the EASST Korosten Project, 2012
Oksana coordinated the official donation of 2 fire engines, fire suits and cutting equipment to the town of Korosten in Zhytomyr Oblast, supported by EASST and Kent Fire and Rescue Service. In addition to the provision of equipment, the Kent fire fighters provided training to the Ukrainian fire fighters in techniques for rescuing road crash victims. Oksana organised the publicity and news media coverage of the project, covering the benefits of the equipment in road safety and the training of the officers in post-crash response.

Project Coordinator/Communications Manager for the EU Funded TEN-T Road Safety Projects, EU Funded
Within the framework of the “Support the integration of Ukraine in the Trans-European Network, TEN-T” road safety projects were implemented in Lviv and Odessa. As part of this, Oksana was involved in advertising and social media campaigns in Odessa to address speeding and seat belt wearing. The Odessa project won HRH Prince Michael Road Safety Award. Other activities included newsletters and press releases, press conferences, leaflets, banners and promotional items.