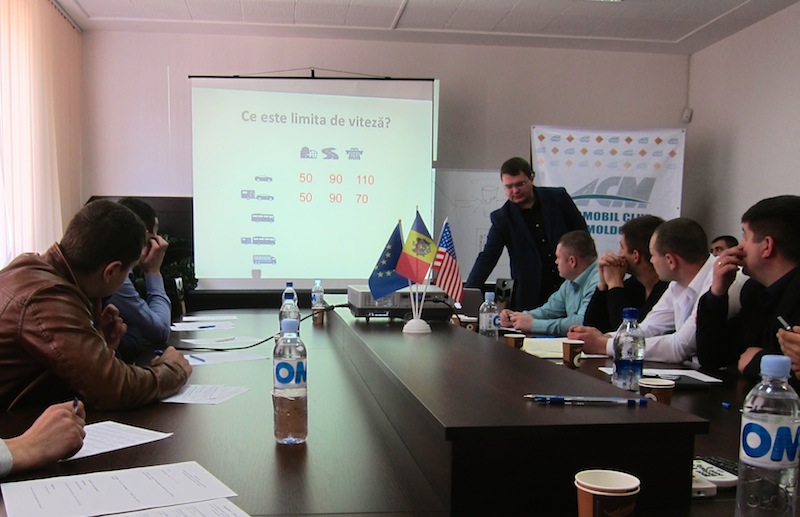 Initial work started in December 2014 when a study tour to the UK for Moldovan police officials took place. The Officers viewed UK Speed Awareness courses and the impact they made on driver behaviour.  A further study tour was organised in April 2015 to learn more about the administration of driver courses linked to traffic offences. The decision was then taken to explore the development of Speed Awareness courses in Moldova.

Following this Tatiana Mihailova conducted a research survey looking at the attitudes of speed offenders in Moldova.  The survey found major differences between the attitudes and knowledge of Moldovan and UK driver offenders. The Moldovans were better at knowing the legal speed limits, but more tolerant of speeding behaviour, thought there was little chance of being caught, and believed that others in the community would not disapprove of speeding.

Using this data, a bespoke pilot Speed Awareness Course was developed with the supported of a leading Health Psychologist from Leeds Metropolitan University.  EASST Director, Emma MacLennan, trained police and civilian trainers to administer the new Moldovan Speed Awareness Course. Following this course, these new trainers trained three groups of Moldovan drivers and speed offenders – a three-hour course that challenged drivers’ beliefs, tested their knowledge, and left them with new skills for speed avoidance. In all 30 drivers went through the course. Their attitudes both before and after were measured to assess the course’s impact.

The results were clear: On a scale of 1-9 (with 9 being ‘excellent’), on average course participants rated the training as:

Participants gave an 8 out of 9 rating for the ability of the course to improve community safety, encourage people to speed less often and create safer drivers in Moldova:

After completing the course participants associated significantly fewer positives with speeding, and significantly more negatives. People reported they would find it easier to avoid speeding in future and would speed less often. Most importantly, participants now reported it was morally wrong to speed – a significant predictor of future speeding behaviour.

Draft legislation is now being prepared to enable Speed Awareness Courses to be carried out more extensively in Moldova. It is hoped to be able to run a larger pilot linked to speed enforcement, and to develop the framework for linking course participation to penalty points on drivers’ licences – with points waived for those successfully completing the course.

The city of Gyumri has a history going back more than 3,000 years, and is the second largest city in Armenia. With support from the EBRD Shareholder Special Fund, the National Road Safety Council of Armenia (NRSC) has been working with EASST experts to build capacity...
Read More

In 2019 an important partnership delivered the campaign that was part of our wider project to support safe and sustainable roads in Bishkek and to improve road safety for all road users. It comes at an important time for Kyrgyzstan, as the following year new...
Read More

In 2019, in partnership with the EBRD Shareholders Special Fund, EASST Experts, the University of Greenwich and the Institution of Occupational Safety and Health (IOSH) delivered specialist training in occupational road safety management. This training was delivered...
Read More

In July 2016, in conjunction with the European Bank of Reconstruction and Development's South West Corridor Road Rehabilitation Project in the Martuk region of Aktobe, Kazakhstan, EASST Expertise consultants delivered a Safe Villages and Education Campaign in the...
Read More

In 2015, the European Bank for Reconstruction and Development, along with their client Adjaristsqali Georgia (AGL), supported a road safety awareness campaign in the towns of Shuakhevi and Khulo in Adjara, Georgia. The aim of the project was to reduce road risks faced...
Read More